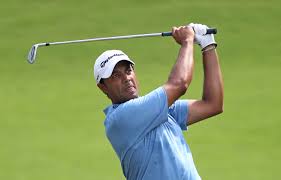 Indian Golfer Arjun Atwal has won the Inaugural edition of US $500,000 Dubai Open Golf Championship title.
His inaugural win comes after he holed an up-and-down for a birdie on the 72nd hole to clinch the title held at Dubai Sports City.
His victory comes after gap of 4 years as earlier in 2010, Atwal had won his first and only title on the PGA Tour and win in the Asian Tour in 2008.
In this title, South Korea’s Wang Jeung-hun came second.
Among other Indian golfers, Shiv Kapur was placed at 11th position along with Gaganjeet Bhullar in the overall standings. While, Jeev Milkha Singh was placed at 31st position while Daniel Chopra finished at 35th position.