Indian flag to be hoisted at New York’s Times Square 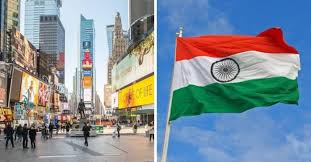 For the first time, a leading diaspora group in the US will hoist India’s National Flag at the Times Square in New York. This is the first occasion on which the tricolour will be unfurled at the iconic location in the US.

The Federation of Indian Associations (FIA) of the tri-state area of New York, New Jersey and Connecticut area of the country will organize this function and the Indian flag will be hoisted there on August 15, 2020, on the occasion of the Independence Day of India. The Consul General of India in New York, Randhir Jaiswal will be the Guest of Honour at the event. The Empire State Building lighting ceremony will be held on August 14, 2020.

FIA was established in the year 1970 and it is now one of the largest umbrella diaspora organizations. The organization has got its new Chairman in Ankur Vaidya in July 2020. He has been long associated with the FIA and was the President of this organization for the year 2014. He is the youngest member of the Board and the youngest also to be chosen as the Chairman of the organization. FIA annually organizes its flagship event – the India Day Parade to make the Independence Day in August. The US Political leaders, lawmakers and also the prominent members of the Indian-American community and celebrities from India participate in the annual parade organized by the FIA.

This is the first time that the Indian flag is being hoisted at the Time Square and it shows the patriotism of the Indian-American community in the country. This event will also mark a fitting tribute to the FIA as it is celebrating its golden jubilee this year. Also, the relationship between India and the US is also being highlighted through this incident.