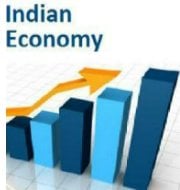 The credit rating agency, ICRA, has predicted that the Indian economy will see a major slowdown in the current fiscal and it is expected to contract by around 9.5% in the Financial Year 2020-2021. The agency had earlier predicted a slowdown of 5% for the Indian Economy.

The reason behind this revision has been shown as localized lockdowns in certain states and also the rising cases of COVID 19 infections in the country. Because of these, it is becoming difficult for the government to bring the economy back on track. For the first quarter of the current fiscal, the agency has estimated a slowdown of 25% with the economy expected to pick up pace in the subsequent quarters. The Indian economy should pose 12.4% slowdown in the second quarter and 2.3% contraction in the third quarter, as per the ICRA estimates. In the last quarter of this fiscal, it is expected that the economy might be able to post growth of 1.3 per cent.

This is the sharpest decline projected by any credit agency so far.

The credit rating agency, however, had also something positive to say such as the rural economy should be able to partly counter this economic stress and also the agricultural Gross Value Added (GVA) should rise by 3.5-4% supporting the rural segment in the country.

It is the measure of the value of goods and services produced in any industry or sector of the economy. It is simply the value of the output adjusted against the value of immediate consumption. It is now used as it is an internationally accepted practice and it helps in the projection of better market conditions.