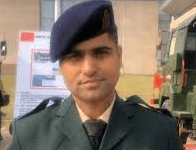 Anoop Mishra, an Indian Army Major from the College of Military Engineering was known for having developed a bulletproof jacket which protects against sniper bullets. He was seen in news recently as he has now developed a helmet, which is also the world’s first, that can stop an AK-47 bullet round from 10 meters.
Indian Army’s College of Military Engineering in collaboration with a private firm has developed India’s first and world’s cheapest gunshot locator called ‘Parth’, which can locate the bullet from distance of 400 meters.