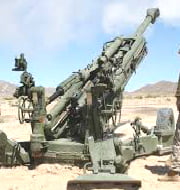 Joint investigation committee (JIC) comprising US and Indian officials has test-fired M777 ultra-light howitzers (ULH) at Pokhran firing range in Rajasthan. The team will review results of this test soon. The test was conducted in the wake of accident during its trial in September 2017.

In November 2016, India signed Rs 5,070-crore deal with US to procure 145 M777 ULH for deployment on mountainous terrain in northern and eastern borders. It was first such induction of artillery guns since Swedish Bofors guns in late-1980s, which got embroiled in political controversy.
As part of deal, two M777 ULHs were brought to India May 2017 for field firing with Indian ammunition to compile firing tables that provide data such as range and elevation. But during September 2017 trial firing, the projectile had bursted in barrel of howitzers. After accident, two sides had formed joint team to examine issue.

It is manufactured by BAE Systems’ Global Combat Systems division. It is smaller and lighter. It weighs 4,100 kg and can be easily transported by helicopters. It has effective firing range of 24 km.
Under India-US M777 deal, 25 ULHs will be inducted directly with rest to be assembled at BAE Systems facility in Maharashtra in partnership with Mahindra Group. The delivery is to be completed by 2021.
Indian Army is going to deploy these artillery guns in high-altitude areas in Arunachal Pradesh and Ladakh, bordering China. Its induction will give Indian defence forces a much needed operational advantage and an access to state of art technology.