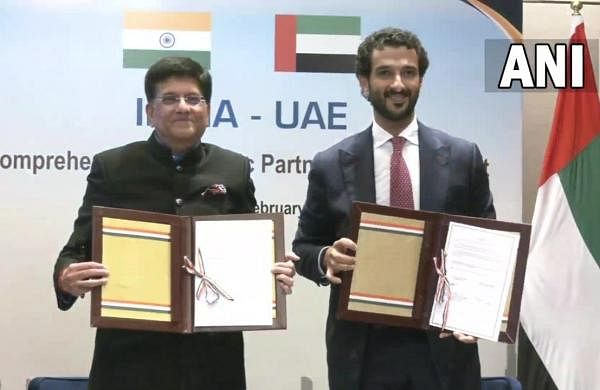 India and the United Arab Emirates (UAE) have signed a trade agreement that will decrease import duties on the majority of Indian exports to the UAE. The Comprehensive Economic Partnership Agreement (CEPA) is the Narendra Modi government’s first significant trade agreement since coming to power in 2014.

Commerce and Industry Minister Piyush Goyal and UAE Economy Minister Abdulla bin Touq Al Marri signed the agreement in New Delhi. While the government expects the decrease in import duties to benefit a wide range of products, the government expects it to increase exports of gems and jewellery, as well as clothes, to the UAE, bringing total trade to USD 100 billion in the next five years. After China and the United States, the UAE is India’s third-largest trading partner in the world. As of 2020-21, bilateral trade between the two countries reached USD 43.3 billion, with thousands of items traded. Trade between the two nations are expected to be USD 59 billion in the pre-pandemic year of 2019-20. 35 lakh people of Indian origin live in the UAE.

The CEPA is due to take effect in the first week of May because the process will take nearly 60 days. During that time, a series of business meetings involving companies from both sides will take place across India.

The agreement covers topics like free trade, government procurement, digital economy, and other critical areas. The agreement will benefit over 90% of all traded items.

Exports of gems and jewellery, leather, textiles, sports goods, footwear, furniture, plastics, pharma, agro goods, medical devices, and engineering goods are expected to benefit from the agreement. Most of these sectors are labour-intensive, and it is estimated that if the bilateral trade grows to $100 billion, at least 10 lakh employment for youth will be created.

Tariff concessions on gold have been given to UAE by India while UAE has removed tariffs on the export of jewellery from India. The UAE has agreed to India’s request that once an Indian medical product has been accepted by the US, UK, Canada, EU, and Australia and has gone through their rigorous regulatory processes, such products will be granted market access and regulatory approval in a time-bound manner of 90 days for marketing in the country.

This agreement will also benefit the exports in a high quantity of minerals, metals, petroleum products, petrochemicals and dates.