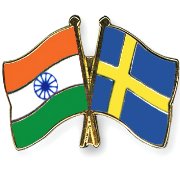 India and Sweden celebrated the 8th Innovation Day on October 26. During the online event they discussed several aspects of climate change and possible solutions to bring in green transition.

The online event was organised under the theme ‘Accelerating India Sweden’s Green Transition’.

Who was the host?

India Sweden Innovation Day was hosted by “India Unlimited” in collaboration with the Embassy of India in Sweden, Confederation of Indian Industry (CII) and Sweden-India Business Council.

Around 10000 Indian citizens are living and work in Sweden. There are also around 9000 persons of Indian origin. Both the groups are employed in business or professional fields.

Relation between Sweden and India dates to 8th century CE and the era of Vikings. During archaeological excavations of an 8th century Viking ship in 1954, in Sweden, a small bronze Buddha statuette was discovered. Statue is thought to have been made around 5th century CE, in present-day Kashmir.