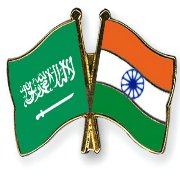 During his visit Prime Minister Narendra Modi gifted a gold-plated replica of the Cheraman Juma Masjid of Kerala to Saudi King Salman bin Abdulaziz Al Saud.
The mosque is situated in Thrissur district of Kerala and is  believed to be the first mosque built in India by Arab traders around 629 AD.The mosque has an ancient oil lamp that is always kept burning and believed to be over a thousand years old. People from all religions bring oil for the lamp as an offering.