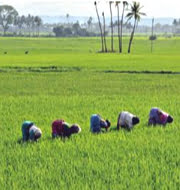 The government has shared data on Lok Sabha on February 11, 2021 that India has suffered a huge crop loss on 18.176 million hectares of land.

The minister further highlighted that the Flood Management and Border Areas Programme (FMBAP) scheme was working in the entire country for flood management. Under this scheme, the government has released the central assistance of Rs 6,409.96 crore till March, 2020. This scheme was launched during Eleventh five year Plan period to provide central assistance to the state governments in order to take up the works related to river management, flood control, drainage development, anti-erosion, anti-sea erosion works and restoration of the damaged flood management works. The programme continued till Twelfth five year Plan.