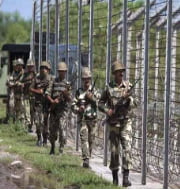 India will erect non-cut steel fence in the sensitive areas of Pakistan and Bangladesh borders. The plan is being executed after security agencies have detected Afghan fighters along India-Pakistan border.

The first steel fence is to be erected across 7-km stretch in Assam’s Silchar, the border across Bangladesh.  After erection, the border is to be analysed by the BSF (Border Security Force).  Based on the feedback of these fence implementation, more such fences are to be implemented. The implementation cost has been estimated as Rs 2 crores per kilo metre.

Apart from steel fences, there are plans to implement LASER fences across the two borders. In order to implement the projects, the Comprehensive Integrated Border Management System (CIMBMS) has been speeded up. The CIBMS operates under Ministry of Home Affairs.

The presence of well-trained terrorists in the borders has increased. Therefore, it is important to secure the vulnerable infiltration spots along the border. Also, these vulnerable spots might be used by the terrorists to create trouble in the newly formed Union Territory.

The GoI recently has implemented several security measures to guard its international border, especially after abrogating Article 370. Around a lakh of Central Armed Forces were deployed in Kashmir. Government also mapped infiltration prone areas along the two borders. In 2018, the BSF mapped and identified vulnerable spots in three-staged exercise.