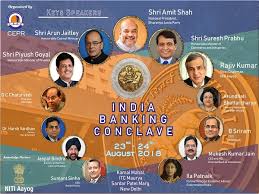 India Banking Conclave (IBC) 2018 was held in New Delhi from 23-24, 2018. It was organised by Centre for Economic Policy Research (CEPR) along with its knowledge partner and government Think Tank, NITI Aayog. The conclave was aimed at making India’s banking sector more adaptable to face multiple future challenges in the coming years.

IBC 2018 focused engaging corporates, law and policy makers of country, academicians and professionals on common platform to make all stakeholders share their views on all impending issues including bad debts and non-performing assets (NPAs) that have been accumulated in unbiased manner.
IBC 2018 aimed to serve as effective platform for varied stakeholders connected to India’s banking and financial sectors.  It also seek to act as bridge between government and key stakeholders and synergize to re-invigorate India’s banking and financial sectors as many believe that a healthy, effectively running banking system can only revive India’s investment cycle and support the country’s growth story.

CEPR is network of over 1100 researchers who are based mainly in universities throughout Europe and collaborate in research and its dissemination. It was founded in 1983 and is based in London, United Kingdom. It aims to enhance quality of economic policy-making within Europe and beyond by fostering high quality, policy-relevant economic research and disseminating it to decision-makers in public and private sectors.  It is funded by a registered, European charity founded in 1983 by Richard Portes, FBA, CBE.