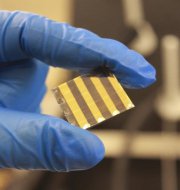 CO is a colorless, odorless gas. It is harmful when inhaled in large amounts The greatest source of CO is internal combustions (IC) engines of cars, trucks and other vehicles or machinery that burn fossil fuels. Breathing high concentration of CO reduces the amount of oxygen that can be transported in the blood stream to critical organs like the heart and brain.

The nanometer-sized sensor was made using zinc-oxide (ZnO) nanostructure on a silicon wafer substrate. Tiny polystyrene beads were also used on the wafer. These beads were first added on the on the oxidised silicon wafer arrange themselves into what is called a hexagonal close-packed structure.
Reasonable level of vacuum is maintained between the wafer and beads. When a high voltage is applied, it etches away the surfaces of the beads until a gap of desired thickness is formed between adjacent beads. Then ZnO is deposited on the system. This occupies the spaces between the beads, forming a honeycomb like nano-mesh that can function as a nanosenor.

The nanometre-scale CO sensor is able to detect a difference in CO level as low as 500 parts per billion (ppb). It can selectively respond to CO even in the presence of other gases. It also significantly cuts down the time and cost involved in making nanostructured gas sensors.