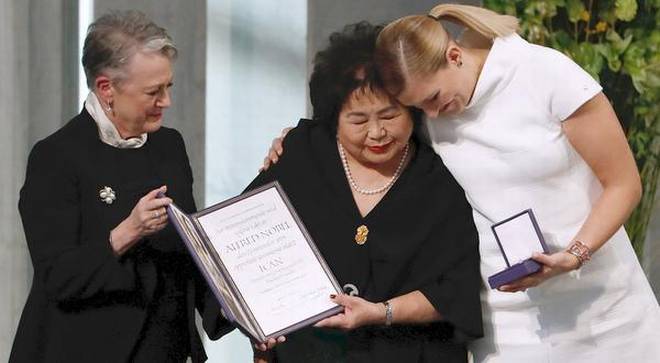 The Geneva-based International Campaign to Abolish Nuclear Weapons (ICAN) received the 2017 Nobel Peace Prize at ceremony held in Oslo, Norway. The award was received by Beatrice Fihn, leader of ICAN and Hiroshima nuclear bombing survivor Setsuko Thurlow.
ICAN, a coalition of 468 grassroots non-governmental groups has been in forefront of pushing for end to use of nuclear weapons through United Nations Treaty on the Prohibition of Nuclear Weapons adopted by 122 nations in July 2017.

UN Treaty on the Prohibition of Nuclear Weapons

It is the first multilateral legally-binding instrument for nuclear disarmament to have been negotiated in 20 years. The treaty was open for signature during the annual UN General Assembly in November 2017. As of September 20, 50 states had signed treaty, which bans use, development, testing or storing of nuclear weapons under any circumstances. The treaty is not signed by and will not apply to any of the states that already have nuclear arms.

ICAN is a global civil society coalition of 468 partner organizations from 101 countries working to promote adherence to and full implementation of Treaty on Prohibition of Nuclear Weapons. It is a leading civil society actor which has taken efforts to achieve a world without nuclear weapons. Originally it was founded in Australia in 2007. Its headquarters are in Geneva, Switzerland.
ICAN’s mission is to shift disarmament debate to focus on humanitarian threat posed by nuclear weapons, draw attention to their unique destructive capacity, their catastrophic health and environmental consequences, debilitating impact of detonation on medical infrastructure and relief measures and long-lasting effects of radiation on surrounding area.