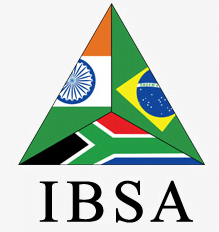 IBSA is an international tripartite grouping for promoting international cooperation among India, Brazil and South Africa. IBSA symbolises three important poles for galvanizing South-South cooperation and greater understanding between three important continents of the developing world namely, Africa, Asia and South America.
IBSA provides with a platform for the three countries to engage in discussions for cooperation in the field of agriculture, trade, culture, and defence among others.