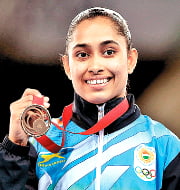 Gymnast Dipa Karmakar (22) created history by becoming the first Indian gymnast to qualify for the apparatus finals of artistic Gymnastics at the Rio 2016 Olympics.
She qualified after finishing eighth on the standings in the final round in the Individual vault final of artistic gymnastics
In this qualifying event Dipa was competing in the third sub-division. She had an average score of 51.665 after scoring 14.850 by performing her much-vaunted ‘Produnova’ vault cleanly on the vault, 12.866 in balance beam, 11.666 on the uneven bars and 12.033 in floor exercises.
The three-time world all-round champion Simone Biles from US topped the charts with a score of 16.050. Besides, Jong Un Hong from North Korea stood at the second position after securing 15.683 and was followed by Giulia Steingruber of Switzerland.