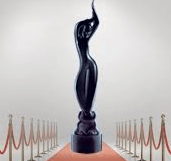 The Bollywood movie based on the life of two rap singers, Gully Boy created history in the Filmfare awards by winning 13 of them. The film won in all 13 categories, which it was nominated in.

In the event held in Guwahati, the film beat the previous record of 11 awards held by ‘Black’ by winning in categories that include Best Film, Best Director for Zoya Akhtar, Best Actor for Ranveer Singh and Best Actress for Alia Bhatt. It also bagged Supporting Role Male and Female, Best Music Album and Best Lyrics.