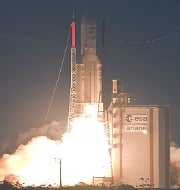 Indian Space Research and Organisation (ISRO) has successfully launched India’s heaviest and most-advanced communication satellite GSAT-11 into space. It was launched on board of Ariane 5 VA-246 rocket from Kourou Launch Base, French Guiana.

GSAT-11 also called Big Bird has been indigenously developed by ISRO. It weigh 5854 kg making it heaviest Indian-made equipment that has been put into the orbit. It will provide high data rate connectivity to Indian mainland and islands users through 32 user beams in Ku-band and 8 hub beams in Ka-band.  It is three to six times more powerful than any other ISRO’s satellite. It will help provide satellite-based internet to remote places where cable-based internet cannot reach. It will boost the broadband connectivity to rural and inaccessible gram panchayats in the country under Bharat Net Project, which is part of Digital India Programme.