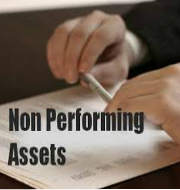 The government has said that the Gross Non-Performing Assets (NPA) of public sector banks as of September 2016 has touched nearly six lakh thirty thousand crore rupees. The total number of NPA accounts in the country is around 66 lakh 40 thousand.

To tackle the menace of NPAs, the government has taken sector specific measures like enactment of Insolvency and Bankruptcy code and the amendment of Recovery of Debts due to Banks and Financial Institutions Act, to improve the resolution and recovery of bank loans. In addition, six new Debt Recovery Tribunals (DRTs) have been established.

The assets of the banks which don’t perform are called Non-Performing Assets (NPA) or bad loans. If customers don’t pay either interest or part of principal or both, the loan is said to be a bad loan. According to RBI, terms loans on which interest or instalment of principal remains overdue for a period of more than 90 days from the end of a particular quarter is called a Non-performing Asset.

Gross NPA is the amount which is outstanding in the books, regardless of any interest recorded and debited.