Govt to work with RBI for Privatisation of Banks 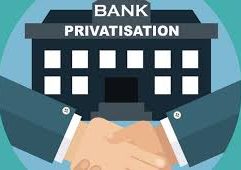 Recently the Union Finance Minister, Nirmala Sitharaman, while addressing the business leaders, chartered accountants and tax professionals in Mumbai stated that the central government will work with the Reserve Bank of India (RBI) to execute the plan of the privatization of the banks.

The minister further said, the Centre have not made plan to form any bank investment company in order to house the government’s bank holdings.

The privatisation on banks is beneficial in understated manner:

However, the plan of privatisation is criticized for diluting the idea of inclusive banking which is practiced now. Inclusive banking was the guiding principle during the nationalization of banks. Further, government will face difficulties in providing low-cost financial services to rural and poor sections because, the private sector banks don’t share the social responsibilities of the government.