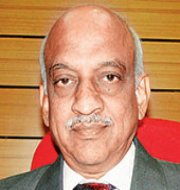 Alur Seelin Kiran Kumar has been appointed chairman of Indian Space Research Organisation (ISRO).
His name was cleared by the Appointments Committee of the Cabinet (ACC), headed by Prime Minister Narendra Modi.
He will replace former ISRO chairman K Radhakrishnan who had retired on 31 December 2014. He will have tenure of 3 years from the date he take charge.
Previously, Shailesh Nayak, Secretary, Ministry of Earth Sciences, was given additional charge of ISRO till the appointment of a new head following the retirement of K Radhakrishnan.
About Alur Seelin Kiran Kumar