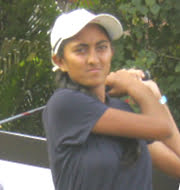 Ace Indian golfer Aditi Ashok won the prestigious Ladies British amateur stroke-play Championship 2015 at Leeds, United Kingdom.
With this victory she became first woman and youngest player from India to win this Championship.
In her wining game, Aditi shot a four-day total of 11-under 285 (comprising 71, 73, 70, 71) at the par 74 at the Moortown Golf Club, Leeds.
The 17-year-old Bengaluru based golfer earlier had won the prestigious St. Rule Trophy in July 2015. She also had finished second in the 2015 European Women’s Amateur Championship. She also had claimed the overall title called ‘The Nicholls Trophy’ and ‘Dinwiddy Trophy’ which are given for the under-18 golfer with lowest score.