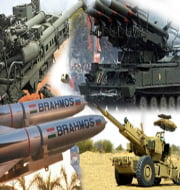 On September 17, 2020, the Government of India permitted Foreign Direct Investment of 74 percentage under automatic route in defence sector. This is being done to attract more overseas investors in the defence industry.

Till date, the Government of India has permitted 100% foreign investments in the defence sector. Of this 49% were allowed under automatic route and above this an approval from the government was required. Now the share of this automatic route has been increased to 74%. The announcement of this decision was made by the department for promotion of industry and internal trade (DPIIT).

The DPIIT was established in 1995 as DIPP.  DIPP is Department of Industrial Policy and Promotion. The following programs and schemes are being implemented by DPIIT

Being the second largest armed forces in the world India aims to achieve self-Reliance in defence production. India also aims to increase its defence Exports as the country is the third largest in the world in allocating defence budget.