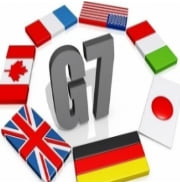 Prime Minister Modi was invited by his British counterpart, Boris Johnson to attend the UK-hosted G7 summit to be held in 2021. India is one of the three guest nations alongside South Korea and Australia. The invitation is in line with the UK government’s intension to work alongside like-minded democracies to address common challenges. This year, the grouping is expected to become D10 following its expansion to include 10 democracies.

What is D10 Group of Countries?

The D10 Group of Countries was proposed by United Kingdom. Britain has proposed the formation of D10 by including G7 countries along with India, Australia and South Korea. D10 stands for ten biggest Democracies of the world. D10 is being formed as an alternate to 5G equipment and technologies to avoid the reliance on China’s Huawei. It aims to create alternative suppliers of 5G equipment and other technologies avoiding reliance on China.

G7 was formed to discuss the political and economic concerns prompted during oil crisis of 1973. It is a group of seven most industrialised countries of the world namely, US, UK, France, Germany, Italy, Japan and Canada. It was earlier called G8. It was renamed as G7 after Russia stepped out of the group in 2014. These countries hold the largest gold reserves and are the top contributors of United Nations Funds.

Every year, the summit is hosted by one of the members. The hosting members shall invite three more guest countries on its will. This year, UK has invited India, Australia and South Korea.

India and UK are currently putting their efforts to boost their bilateral relationship. This comes at a time when there is a downward side in China-UK relations. The relations between UK and China have slid to the most confrontational levels mainly because of the recent National Security Law imposed by the latter on Hong Kong. Another major irritant between the countries is the decision of UK to ban Huawei 5G Network services.