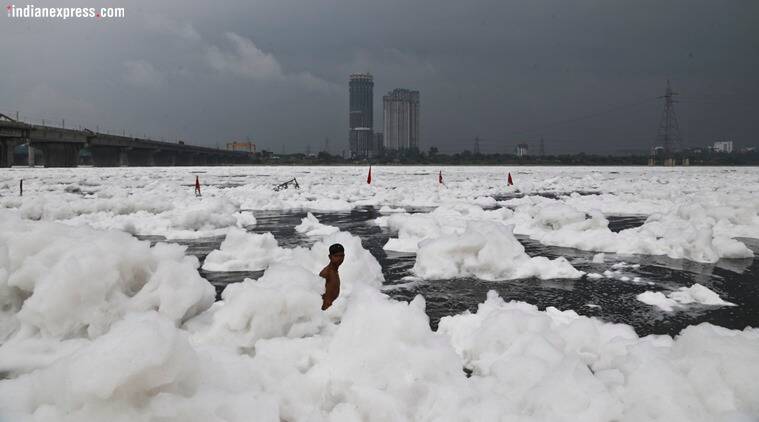 Context in Current Affairs: For the last decade, frothing has been observed in River Yamuna and the same has been on the rise for the last 5 years. This is seen as a major indicator of degrading of Yamuna River Ecosystem. Both physical and chemical factors are responsible for the phenomenon.

Why is River Yamuna Frothing?

Froth means a mass of small bubbles on a liquid surface. It is also referred to aggregation of bubbles on an agitated liquid. Since Yamuna River water falls from a great height in Okhla barrage, it leads to bubble formation. Also, during winters the temperature dips to near zero. Hence, foam formation is accompanied. The chemical factors responsible for foam formation and frothing is Ammonia increase from untreated household waste containing detergent and phosphorous increase in effluent released from industries etc. The froth on Yamuna river reflects the adverse impact of manmade activities on environment and urgent steps are to be made on this regard to prevent further deterioration.

How and where do the effluents enter River Yamuna?

Most of the pollution of river Yamuna comes from Wazirabad where it enters Delhi. According to the Delhi Pollution Control Committee and the CPCB (Central Pollution Control Board), 90% of the domestic wastewater in the city flows into river Yamuna. Around 58% of the waste of the national capital is dumped into the river. The waste water mainly comes from household activities and therefore it is highly rich in phosphate compounds, laundry chemicals and detergents.

The samples collected show that the phosphate concentration in the river is 0.51 mg/litre. It should be between 0.005 and 0.05 mg/litre.