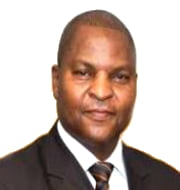 Faustin Archange Touadera has won the 2016 Presidential election of Central African Republic (CAR) held on 14 February 2016.
He had contested as an independent candidate in this election and secured 62.7 percent or 695,000 valid votes.
He defeated Georges Anicet Dologuele of Union for Central African Renewal Party who had obtained just over or 37.3 percent or 413,000 votes.
Faustin Archange Touadera is well-respected former mathematics professor. He had served as former Prime Minister of ex-president Francois Bozize from January 2008 to January 2013.
Central African Republic is one of the world’s most chronically unstable countries. In early 2013, it had suffered the worst crisis in its history when mainly Muslim Seleka fighters in a coup had toppled President Francois Bozize.