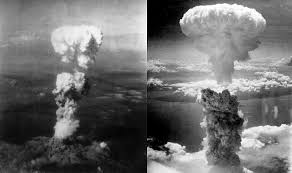 Japan marked the 75th anniversary of the first-ever atomic bomb attack in the world amidst the COVID 19 pandemic. The celebrations were muted because of the pandemic situation to remember the victims of the ghastly attack by the US in 1945.

Survivors, relatives and a handful of foreign dignitaries attended the main event in Hiroshima this year to pay tributes to the victims who had died in the attacks. However, the general public was kept away with the ceremony being broadcast online by the government. The participants in the program were dressed in black and wearing face masks, offering silent prayer at exactly 8:15 am, the time of the attack over the city.

During the course of the World War II, the US Forces dropped two bombs at the Japanese cities of Hiroshima and Nagasaki on August 6 and 9, respectively, just after the attack by the Japanese forces on the Pearl Harbour base of the US. This attack by the US killed around 140000 people with many of them dying instantly with others succumbing within weeks and months that followed, because of radiation sickness, burns and other injuries. In the attack on Nagasaki, around 74000 people died.

This anniversary underscores the decreasing number of bomb survivors in the country, known as Hibakusha, many of whom suffered physically and psychologically because of the attack. Those who remain were mostly infants or young children at the time, and their work to keep the memory of the bombings alive and call for a ban on nuclear weapons all over the world has assumed urgency in the present age.