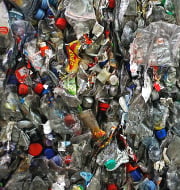 The Vishakhapatnam Municipal Corporation has achieved great results from its long battle against plastic bags. The measures taken by the corporation and their strict implementation is the sole success in the battle.

Measures against use of Plastics

The corporation framed strict guidelines, fines against the local community using plastic bags. Especially, they were extended to the shop-keepers and vendors.

A fine of Rs 2,000/- was imposed on persons found using plastic carry bags. The Corporation has collected Rs 20 Lakh as fine in the last few months. An alternate of providing reusable bags on payment was encouraged among the shop keepers and street vendors.

The sellers, shop keepers and vendors were scrutinized largely as compared to the public. There around 40,000 shops in and around Vizag. Though it is difficult to keep an eye on every shop, around 20,000 of them are under strict vigil.

BRING YOUR OWN (BYO)

The Bring Your Own Campaign that was launched locally was a huge success. The effect is visible even at departmental stores.