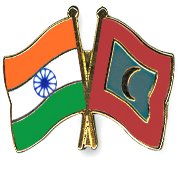 The relation of India with Maldives was established in the year 1966. India is among those countries that recognized the Maldives after it gained its independence in 1965.  Both the countries share an ethnic, linguistic, religious, cultural and commercial links. Currently, the Maldives is home to 25,000 Indian nationals. Both the countries are the founding members of SAARC. India also consider Maldives a part of its ‘Neighbourhood First’ Policy. In the line, India is a part of ‘India First’ policy of Maldives.

The economic relation between both the countries have strengthened significantly after the success of Operation Cactus. India has always provided extensive economic aid for developing infrastructure, health, telecommunications in the country.  India also established the Indira Gandhi Memorial Hospital in Male.