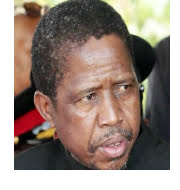 Edgar Lungu has sworn in as Zambia’s sixth President.
He was declared elected as President in elections held at 24 January 2015 to replace the late Michael Sata, who died in office in October 2014.
In this election his ruling party Patriotic Front (PF) won with a narrow margin by securing 48.33 percent of total votes over his rival Hakainde Hichilema of the United Party for National Development (UPND).
He will be in office and lead southern African nation for the remainder term of Sata’s until next a general election scheduled in September 2016.
Edgar Lungu is former defence minister from the Zambia’s ruling Patriotic Front (PF).