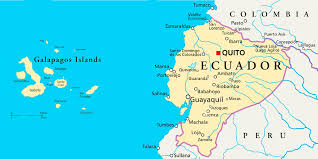 Located in the South America continent, the Republic of Ecuador has declared a state emergency on Sunday 22nd December 2019 after a ship carrying 6000 gallons (2,500 liters) of diesel oil sank near the UNESCO World Heritage Site of Galapagos Islands. From continental Ecuador, the Galapagos Islands are located 906km towards the west.  The accident occurred at the San Cristobal port when a crane collapsed while loading one of the oil barges into the ship, as a result, the barge fell to the deck of the ship and destabilized the ship, causing it to sink.

A large of endemic species, a wide and rare variety of birds and plants and rare animals such as Giant Tortoises, Iguanas, etc are found in the Galapagos Archipelago which is a group of 130 islands. The entire archipelago with a population of around 25,000 is under the administration of the Republic of Ecuador. Emergency measures were taken by the Ecuadorian Navy and by the authorities of the Galapagos Islands to contain the spill, by setting up oil absorbent clothes around the oil patches in the water and setting up protective barriers.