The path of the Earth around the Sun is elliptical and slightly irregular due to gravitational attraction of moon and other celestial bodies. A constant angle is maintained between the earth’s axis and its plane of elliptic, which is called angle of inclination. As we know that Earth’s rotation axis is tilted by 23.44°  with respect to the elliptic, and is always pointed towards the celestial poles when the earth moves around the Sun.

The above phenomenon gives rise to 4 seasons. 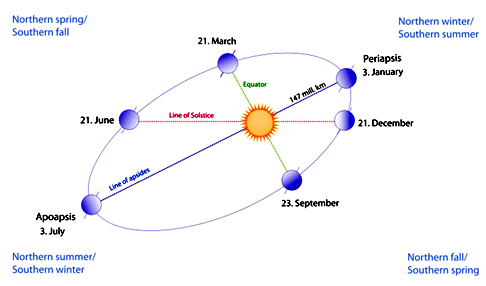 The solstice refers to the events when the Sun’s apparent position in sky reaches its northernmost or southernmost extremes. Solstice happens twice a year, and twice a year happen the equinoxes. Altogether, the four are considered to start 4 seasons.

For 6 months of the year, the Sun appears to be moving north. This Northward migration of Sun appears to begin after December 22 and is completed on June 21, when the Sun is directly overhead 23.44° North. Dute to this, In India we call this Uttarayan.

After June 21, for the next 6 months, Sun appears to be moving South and this southward migration appears to get finished , when Sun is directly overhead the 23.44° South. In India we call this apparent migration Dakshinayan.

At equinox, Sun is at one of two opposite points where the celestial equator and ecliptic intersect. Sun can be observed to be vertically overhead the Equator. Equinox happens around March 20/21 and September 22/23 each year.

Aphelion is the point when Earth is farthest from the Sun and it occurs on July 4. The distance is  152.5 million Kms,

Speed of Earth is fastest at Perihelion and slowest at Aphelion (Kepler’s Second Law).  The following Graphic shows the Solstice, Equinoxes and Helions altogether: