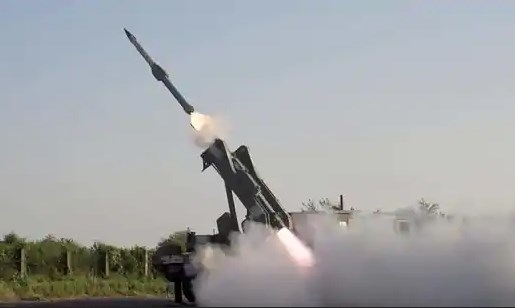 The Defence Research and Development Organisation (DRDO) has successfully test-fired the surface-to-air Akash-NG (New Generation) Missile off the Odisha coast. The missile can intercept the aerial threats. The missile has been launched in order to boost the Indian Air Force (IAF) defence system.

The Akash battery comprises of a single Rajendra 3D passive electronically scanned array radar or Simple the Rajendra Radar and four launchers with three missiles each. Each battery can track up to 64 targets and attack up to 12. It comprises of a 60 Kg high-explosive, pre-fragmented warhead. The missile is capable of protecting the moving convoy of vehicles. It provides air defence missile coverage for the area of 2,000 km².

It is also called as the passive phased array. PESA is an antenna in which beam of radio waves can be electronically directed to point in different directions in which all the antenna elements are connected with the single transmitter. PESA is highly used in radars.