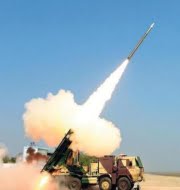 The enhanced version is to achieve longer range as compared to the earlier version. This is to replace the current version of Pinaka Mk-1 system deployed along the borders of Pakistan and China.

The Pinaka multi-barrel rocket launcher system called the Shiva’s bow can fire 12 rockets in 44 seconds. One single battery of Pinaka system consists of six launch vehicles. They are accompanied by command post, links with network-based systems and radar. A battery can neutralize an area of 1 km by 1 km.

A total of six rocket was launched. The rockets tested were manufactured by the Economic Explosives Limited, Nagpur. DRDO had transferred the technology to the manufacturer. The test was tracked by instruments such as Electro-Optical Tracking System, radar.

DRDO began development of multi-barrel rocket system in the late 1980s. It is an alternate to the Russian Multi Barrel Rocket Launcher System called “Grad”. Pinaka was first used in Kargil war.