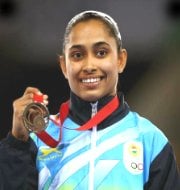 Indian artistic gymnast Dipa Karmakar has created history by becoming the first Indian woman gymnast to qualify for Olympics.
She achieved this feat after her strong performance at the final qualifying which helped her to book 2016 Rio Olympics Games berth to be held in August 2016.
In the test event, she earned a total score of 52.698 points in the artistic gymnastics event. She has been listed as the 79th gymnast in the list of women’s artistic gymnasts who have qualified for the Rio Olympics.