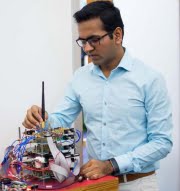 Indian-born researcher Dinesh Bharadia (28) has won the prestigious 2016 Marconi Society Paul Baran Young Scholar Award for his contribution to radio waves.
He was chosen for the award for his contribution to send and receive radio (wireless) signals, including mobile telephony and data on the same channel (wave).
His duplex radio technology has disproved a long-held assumption that it is not possible for a radio to transmit and receive on the same frequency band because of the interference.