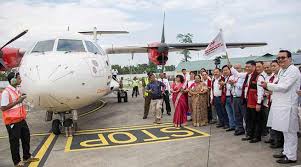 The Directorate General of Civil Aviation (DGCA) has announced an increase in the fares of air travel on February 11, 2021. The fare has been increased up to Rs 5,600.

The ministry of civil aviation had imposed a fixed cap on air travel when the Covid-19 pandemic was at its peak. This price cap has now been removed because the market has now opened up. The government had suspended all the commercial passenger flights in March 2020 because the government had announced a strict nationwide lockdown in order to contain the spread of the coronavirus. Now, the government has allowed to resume the running of the domestic flights across the country.

It is the statutory body formed through the Aircraft (Amendment) Bill, 2020. The body investigates the aviation accidents and incidents. It also maintains all the aviation related regulations.  The body is headquartered in New Delhi.