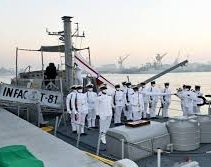 The Indian Naval Fast Attack Craft, IN FAC T-81, of the Super Dvora MK II class was decommissioned on January 28 2020 in Mumbai.

It is a high-speed class of patrol boats. He boats are meant for a variety of naval missions ranging from the typical off-shore coastal patrol mission profiles to a high-speed, high-manoeuvre littoral warfare. It is built by Israel Aerospace Industries for the Israeli Sea Corps. It is the successor to the Dvora-class fast patrol boats. He boats have been employed by the Sri Lanka Navy to counter the LTTE operations at sea.

FAC is a small, fast, agile and offensive warship that are armed with anti-ship missiles, gun or torpedoes. They are operated in close proximity to land. They lack seakeeping and all-round defensive capabilities to survive in blue water. They can reach up to the speeds of 25–50 knots.