Breed-Wise Report of Livestock and Poultry 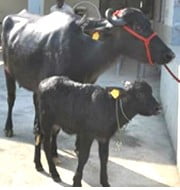 Union Minister of Fisheries, Animal Husbandry, and Dairying released the Breed-Wise Report of Livestock and Poultry.

When was the data collected?

The breed-wise data collection was done during 20th Livestock Census (2018-19).

What is the unique thing about the latest data collection?

It is the first time in India that breed-wise data is collected digitally instead of on paper mode.

What is the coverage of the report?

It collected data regarding 184 indigenous/exotic & crossbred breeds of 19 species that are recognized by the NBAGR (National Bureau of Animal Genetic Resources).

What are the findings of the report?

What did the report say about the cattle population?

The share of Indigenous and Non-descript (non-identified) cattle is 73.5%, and the remaining share is of exotic and crossbred cattle. Crossbred Jersey has a major contribution to Exotic/Crossbred cattle. Gir, Lakhimi, and Sahiwal breeds have the highest share in Indigenous Cattle. Indigenous cattle declined by 6%, i.e their share in the total cattle population fell to 73% in 2019 from 79% in 2012.

Which cattle breeds have seen a maximum decline in their numbers?

Which cattle breed has the highest population in terms of absolute number?

Gir cattle breed had the highest population of 68.57 lakh followed by Lakhimi and Sahiwal cattle breeds.

What is the share of cattle among the total livestock population?

As per the 20th Livestock Census, 36.04% of the total livestock population belongs to cattle.