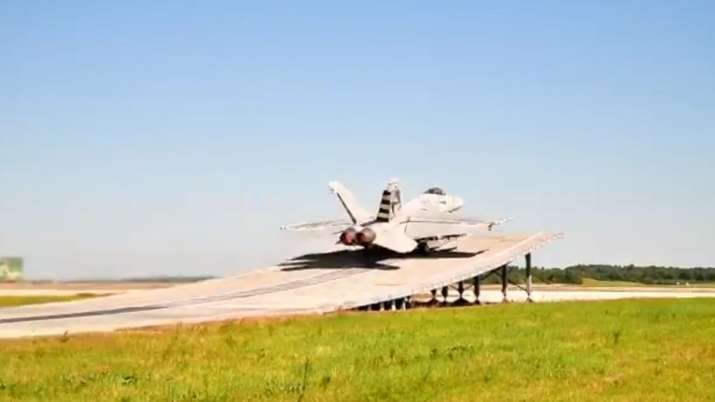 The US based Aircraft Giant Boeing recently announced that the F/A-18F Super Hornet Fighter Jet of the company has successfully completed the ski-jump. This makes it suitable for the Aircraft Carriers of the Indian Navy. The company has proposed to the Indian Navy under its “By India For India” programme.

In the aviation industry, Ski-Jump is an upward curved ramp. It allows the aircraft to take off from a run way that is shorter than the required take off roll of the aircraft. The Indian Navy currently operates only one Aircraft Carrier INS Vikramaditya. The second Aircraft Carrier, INS Vikrant has just entered sea trials. Both are ski-jump carriers.

About the Super Hornet Fighter Jet

It is a twin engine, multirole, carrier-capable aircraft variant. It was designed based on the McDonnel Douglas F/A-18 Hornet. It has an internal rotary cannon. It can carry air-to-air missiles and air-to-surface missiles. It comes with an external Air Refuelling System. Air Refuelling System is also referred to as Aerial refuelling. It is the process of transferring aviation fuel from on military aircraft to another during flight. Rafale fighter Jets are also equipped with Air Refuelling System.

The super Hornet entered the fleet service for the first time in the US Navy in 1999. It played a leading role in Operation Southern Watch. It was an US Operation launched in Iraq to monitor and control the southern and south-central skies of the country between 1992 and 2003.

India and US Aircraft Carriers

The proposals from Boeing might not be enough to make a deal with Indian Navy. Indian Navy is currently in need of multi-role carrier based fighter jets. The DRDO along with Aeronautical Development Agency is currently in the process of developing indigenous Twin Engine Carrier Based Deck Fighter. They are to enter service in the early 2030s.

Why did Boeing make the proposal to the Indian Navy?

Indian Navy, in 2017, made a Request for Information globally to procure fifty-seven fighter jets. However, due to budgetary restrictions and indigenous fighter jet under development, Indian Navy is to reduce the number of jets to be procured from fifty-seven to thirty-six. Also, the final decision is yet to be made.