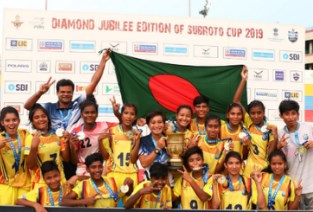 In first half of game, Bangladesh Krida Shiksha Prothishtan (BKSP) started with enjoying majority of possession while Nilmani English School from Manipur failed to make any further impact and half ended with Bangladesh leading 2-0.

The second half, started with Nilmani English School, Manipur trying to take game to BKSP but they didn’t have much success. Bangladesh held their ground and defended their goal by maintaining a very strong formation at the back and later launched timely counter attacks to push Manipur defence back.

The game ended with Shirina Akter, Akilma Akter and Sapna Rani scoring for Bangladesh Krida Shiksha Prothistan (BKSP) and cruising the team to a 4-0 win over Nilmani English School, Manipur, in final of Diamond jubilee edition of Subroto Cup (U-17 girls).

It is one of the famous inter-school football tournament in India. It was founded in 1960 and since then it is being conducted annually every year.

It is conducted by IAF, with help of Union Ministry of Youth Affairs & Sports.