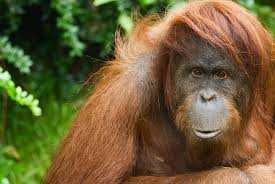 India’s only orangutan named Binny died at the age of 41 in Nandankanan Zoological Park in Bhubaneswar, Odisha.