Base Erosion and Profit Shifting

Base Erosion and Profit Shifting (BEPS) has emerged as one of the most important challenges for the governments across the world today. The globalization, privatization and liberalization has resulted into free movement of capital and labour, shift of manufacturing base from high cost to low cost locations, gradual removal of the trade barriers and rise of digital economy. LPG has boosted trade and foreign investments in many countries thereby supporting growth, employment generation, innovation and removal of poverty. LPG has led to flourishing of multinational corporations with their presence in many countries.

As early as 1920s, it was recognized that the interaction of the foreign companies with domestic tax system in host country might lead to double taxation which might result in adverse impacts on the growth and global prosperity.

To eliminate double taxation countries started entering into Double Tax Avoiding Treaties. The bilateral tax treaties are effective in preventing double taxation, but they often fail to prevent double non-taxation that results from interactions among more than two countries. This led to an increased number of sophisticated tax planners around the world. These professionals would identify and exploit the loopholes in the tax treaties thereby allowing the MNCs to do aggressive treaty shopping and go for Base Erosion and Profit Shifting (BEPS) to reduce their tax burden. This has harmed governments because they need to cope with less revenue and incur heavy cost to ensure tax compliance. This is a critical issue around the world.

Base Erosion and Profit Shifting (BEPS)  refers to those instances where  gaps between different tax rules leads to tax avoidance causing harm to the government. It refers to all those artificial arrangements where:

Further, the spread of the digital economy has also posed challenges for international taxation.

Over the years, the MNCs have artificially reduced their corporate tax outgo by shifting to lower tax jurisdictions. As per OECD estimates, the base erosion and profit shifting has resulted in a loss of $100-240 billion every year to countries which is around 4-10% of global corporate income tax revenue.

Originally, OECD had started the BEPS project in response to the 2008 financial crisis in order to create sustainable economic growth. It was formally launched in 2012 by the G-20 Finance Ministers who in turn called on OECD to develop an action plan to address BEPS issues in a co-ordinated and comprehensive manner and develop an action plan with inter alia, following points:

In 2013, the OECD came up with an action plan  to address the Base Erosion and Profit Shifting menace. This action plan has 15 actions points. In summary, the 15 OECD action points seek to develop a more coherent international system to address the problems of digital economy taxation, treaty abuse, transfer pricing, aggressive tax planning and disputes related to such problems. The document says that countries should build consensus on how to effectively address the tax compliance of digital products and services and effective collection of VAT/GST with respect to cross border supply of digital products and services. It talks about neutralising the effects of hybrid mismatch arrangements and strengthening the CFC (controlled foreign company) rules. It aims to improve transparency both for business and governments by introducing commonly agreed minimum standards for tax administration across countries.

Hybrid entity refers to the companies which might be treated differently in two tax jurisdictions. A hybrid instrument is one which is treated differently in two tax jurisdiction i.e. debt in one and equity in other. The tax planners exploit the asymmetries between different tax jurisdictions through the use of a hybrid entity or a hybrid instrument. The OECD action plan calls for developing model treaty provisions regarding domestic rule to neutralize the effect of hybrid mismatch arrangements. 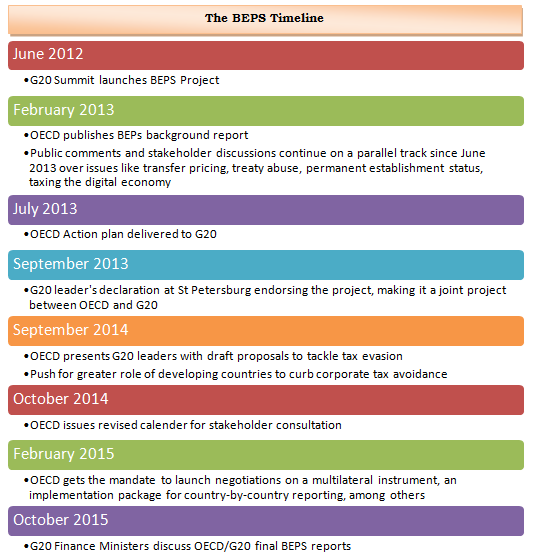 The G20-OECD led project on base erosion and profit shifting (BEPS) is currently taking a firm shape. It aims to fulfil the 15 points of the G20-OECD on the multifarious aspects of international tax policy by December 2015. On October 5, 2015, OECD has released a Base Erosion and Profit Shifting (BEPS) package containing final reports on 15 identified focus areas. This report includes recommendations for significant changes in the key elements of international tax architecture. In 2016, OECD is expected to come out with a multilateral convention to prevent the treaty abuses.

India has also responded positively to the G20-OECD led BEPS project. For a developing country like India, any such regime which effectively addresses the treaty shopping would result in more tax revenues. Further, India is also in the process of making tax treaties sustainable with its bilateral partners such as Mauritius. India also has become a signatory of the Multilateral Competent Authority Agreement on Automatic Exchange of Financial Account Information on 3rd June, 2015. These new global standards on automatic exchange of information, known as Common Reporting Standards (CRS), once implemented, will facilitate automatic exchange of taxpayers’ information between treaty partner countries for speedy dispute resolution and reducing instance of base erosion through use of dubious structures/financing instruments in cross-border transactions.

It was recently reported that the Budget 2016-17 might take some recommendations from the BEPS measures and make domestic anti-abuse provisions such as rules to block thin capitalization, Controlled Foreign Corporation (CFC) Regulations etc.