Aziz Qureshi sworn in as Governor of Mizoram 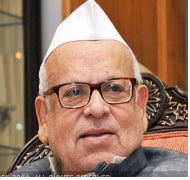 Aziz Qureshi has sworn-in as the Governor of Mizoram. Justice Michael Zothankhuma, Judge of the Gauhati High Court, administered the oath of office to Qureshi.
The swearing-in ceremony was held at the Durbar Hall of the Raj Bhavan in Aizawl. It was attended by the s Mizoram Chief Minister Lal Thanhawla and some of his cabinet colleagues.
Earlier Aziz Qureshi was governor of Uttarakhand. But in December 2014, he was transferred from Uttarakhand and was appointed as the Mizoram Governor.
Constitutional provisions of Governor