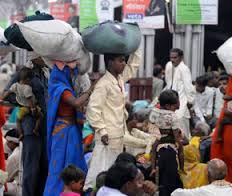 The Government of India has no data on actual migrants spread all over the country. Therefore, the Department of Food and Public Distribution (DoFPD) has taken up a liberal figure of 8 crores of migrant workers. This has been fixed assuming that the migrant population will be 10% of total 80 crore of NFSA (National Food Security Act) population.

According the figure fixed (8 crore), the DoFPD has made a uniform allocation of 4 lakh million tonnes of food grains for the migrants under Atma Nirbhar Bharat Abhiyan.

Under Atma Nirbhar Bharat Abhiyan, the GoI had announced that the migrant workers will be provided with 5 kg of rice/wheat per person per month for a period of two months (May and June 2020).

Though the states and union territories have made efforts to identify stranded migrants in quarantine centres, some of the states informed that majority of the migrants who have moved back to their native places might have access to National Food Security Scheme. Therefore, the previously allocated 8 lakh million tonnes may not be utilized completely. Hence, a random number of migrant population was estimated and 4 LMT has been allocated.