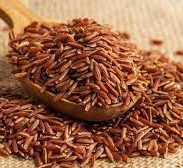 The first consignment of ‘red rice’ was flagged off on March 4, 2021 to the United States. This adds on to the India’s rice exports potential. The rice was sourced by leading rice exporter called ‘LT Foods’.

The ceremony of the flagging-off of the export consignments was carried out by APEDA Chairman Dr. M. Angamuthu in Haryana. The APEDA is involved in promoting rice exports with the help of several stakeholders along the value chain. The government had also set up a “Rice Export Promotion Forum (REPF)” under the parent head of APEDA.

The red rice is rich in Iron and is grown in the Brahmaputra valley of Assam. It is grown without using any chemical fertilisers. This variety of rice is called as the ‘Bao-dhaan’, which is an integral part of foods in Assam.

The commerce ministry of India said that, the non-basmati rice exports of India have increased to Rs 26,058 crore for the months of April-January 2020-21 as compared to the exports of Rs 11,543 crore for the same period in the fiscal year 2019-2020.

APEDA is the Apex-Export Trade Promotion Active government body. The body was set up by the “Ministry of Commerce and Industry”. It was set up under the APEDA Act. The Act was passed in December 1985. Following that, the apex body was established and came into effect from February 1986.

The REPF was set up by the Government of India to boost the rice exports. The forum takes up the collaborative steps so as to identify and document particulars. It also reaches out to the stakeholders along the entire production or supply chain of export of rice. In this way, it enhances the exports at the global market. REPF comprises of the representatives of the exporters, officials from APEDA, rice industry, ministry of commerce, and directors of agriculture from the major rice-producing states like Uttar Pradesh, Punjab, West Bengal, Telangana, Haryana, Assam, Andhra Pradesh, Odisha and Chhattisgarh.