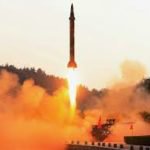 On October 22, 2020, the anti-tank missile Nag successfully passed the final trials of DRDO. The missile is to enter production.

The DRDO conducted the final test trials of the Nag missiles and was successful. The test was conducted at the Pokhran test firing range located in Rajasthan.

The Nag missile was fired from the Nag Missile Carrier. The range of Nag missile is between 4 and 7 kilometres. In 2018, the Ministry of Defence cleared acquisition of 300 Nag missiles and 25 Nag Misile Carriers. A Nag carrier is a modified BMP infantry combat vehicle.

The Nag missiles were developed under the Integrated Missile Development Programme of India. The programme suffered a set back in 2012 after it failed some tests. In 2018, Nag successfully struck teo targets in different ranges. Again, the missile was tested in 2019 to check on its winter performance and was successful

India has been conducting frequent missile tests amidst the stand off with China in Ladakh. The rently conducted tests are as follows

Apart from China, COVID-19 is also a reason for the DRDO to conduct frequent missile tests in the last month. The movement of scientists were restricted due to COVID-19 that delayed several projects.