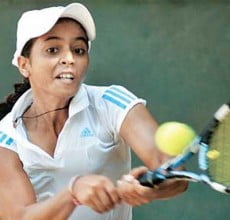 Ankita Raina has won 25,000 US Dollar ITF singles title in maiden attempt.
In the finals she defeated Katy Dunne from Britain by score of 6-2, 6-2 held at Deccan Gymkhana in Pune, Maharashtra.
She also became the first Indian to clinch the title in the tournament after 14 years.
About Ankita Raina
She is native of Ahmedabad, Gujarat. In total, she has won five singles and six doubles titles on the ITF tour in her career. On 9 June 2014, her world rank number was 262 in singles while as on 22 December 2014, she peaked at world number 263 in the doubles rankings.
She has win-loss record 3-4 while playing for India at the Fed Cup.