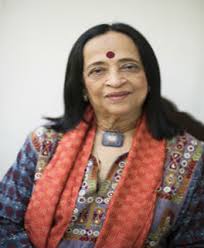 Madhya Pradesh Government has conferred prestigious National Kalidas Samman on noted artist Anjolie Ela Menon (78) for her contribution to visual arts. The award was conferred in recognition of her insightful and sensitive portrayal of the identity and spirit of women through her meaningful paintings in a variety of media.

She is counted among India’s most accomplished artists. She is a well-known muralist and one of India’s leading contemporary artists. Her preferred medium is oil on masonite, but she also has worked in other media, including glass and water colour. She is recipient of numerous national and international awards including the Padma Shri. She recently received a doctorate from Rabindra Bharati University.

It is prestigious arts award presented annually by Government of Madhya Pradesh. The award is named after Kālidāsa, a renowned Classical Sanskrit writer of ancient India. It was first awarded in 1980. It was initially conferred in alternate years in fields of Classical Music, Classical Dance, Theatre and Plastic Arts. From 1986-87 onwards, it was presented in all four fields every year. The award is presented for outstanding achievement in one of the four categories. Some of the previous recipients are Pandit Ravi Shankar, MF Husain, Pandit Jasraj, Shambhu Mitra, Habib Tanvir, Ebrahim Alkazi etc.