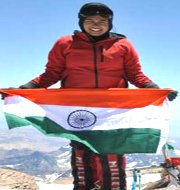 India’s star amputee mountaineer Arunima Sinha has successfully scaled Mount Aconcagua in Argentina as part of her Mission 7 Summits.
It was her 5th successful summit of the Mission 7 Summits that she had climbed on December 25, 2015 after starting on December 12, 2015.
With this, she created World record by becoming First Female amputee to climb 5 Mountains of the World. These are Mt. Everest (Asia), Mt. Kilimanjaro (Africa), Mt. Elbrus (Europe), Mt.Kosizko (Australia) and Mt. Aconcagua (Argentina),
Mt. Aconcagua (6,960.8 metres) is the highest mountain outside Asia and is also known as second Everest. By extension it is the highest point in both Western Hemisphere and Southern Hemisphere.