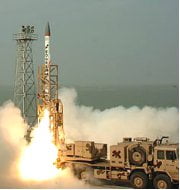 The Surface to Air Missile (SAM) AKASH was successfully tested with indigenous radio frequency seeker against target UAV Banshee. It was successfully launched from Launch Complex-III at ITR Chandipur.
During the test, radars, telemetry and electro-optical systems along coast had tracked and monitored all the health parameters of the missile.

This was the first supersonic surface-to-air missile (SAM) with indigenous seeker that has been test fired. With this success, India has achieved the capability of making any type of SAMs.

Akash (means sky in English) is a mid-range surface-to-air missile (SAM). It is medium range nuclear capable supersonic missile. It has been indigenously developed by Defence Research and Development Organisation (DRDO) under Integrated Guided-Missile Development Programme (IGMDP).
It is multi target, multi directional, all weather air-defence missile system consisting of surveillance and tracking radars for defending vulnerable areas against medium range air targets penetrating from low, medium and high altitudes. It has supersonic speeds ranging from Mach 2.8 to 3.5.
It has capability to carry 55- kg fragmentation warhead that is triggered by proximity fuse. It can engage aerial targets up to range of approximately 25 kms. It can reach high altitude of 18 kms and as low as 30 meters.
It is powered by Ramjet-rocket propulsion system (RRPS) which renders thrust for the missile to intercept the target at supersonic speed without any retardation. It is capable of neutralising aerial targets like cruise missiles, fighter jets, unmanned aerial vehicles (UAV) and air-to-surface missiles. It has been inducted into Indian Army as short range surface to air missile. It was also formally inducted into IAF in July 2015.